The Medal of Honor Project is taking its first road trip. 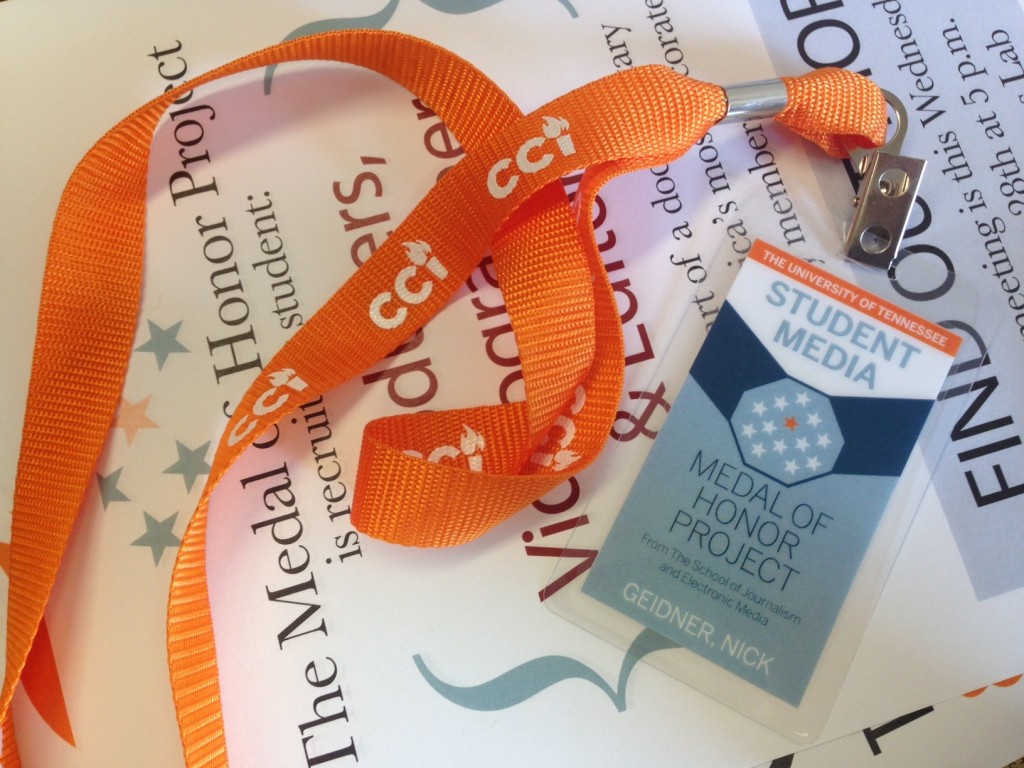 Four student and two staff from the School of Journalismand Electronic Media will be going to Gettysburg, Pa. from Thursday to Sunday to report from the 2013 Medal of Honor Convention.

JEM students Jake Thompson, Taylor Hathorn, Kyle Knell and Jackie DelPilar, will document the 2013 convention as the Congressional Medal of Honor Society’s flag is passed from Gettysburg to Knoxville for the 2014 convention. The students will interview Medal of Honor recipients, their families and a number of celebrities and dignitaries attending the convention, such as Wolf Blitzer and Tom Selleck.

Jake Thompson, journalism graduate student, had the following thoughts about the upcoming trip.

I’ve been asked by most of my family what I am most excited about in terms of my trip to the 2013 Medal of Honor Convention in Gettysburg, Pa. My answer is always the same:

To me, this project has always been about the history and the stories behind the recipients, and their legacies. I am but a humble scribe and collector of the amazing stories that these men have lived. Gettysburg is a chance to meet many of the greatest men that I will ever get to meet and that excites me to no end.

The logistics of the events, the actual schedule of shooting, the long hours, all of that matters none to me. I would gladly be up from Thursday morning until Sunday night with zero sleep in order to meet and talk to these American Heroes. That is how much this all means to me.

I’ve always been a student of history, and military history in particular, so to meet these men is a singular honor. It’s fascinating to hear their tales of bravery, but it is even more fascinating to realize that they did these things not for glory, but for the man standing next to them. Brotherhood ruled most of the actions that earned these men the Congressional Medal of Honor.

It is only fitting that the Congressional Medal of Honor Convention is in Gettysburg on the 150th anniversary of the Battle of Gettysburg. So many Americans lost their lives fighting to keep this country together 150 years ago. Now, we honor Americans, who did amazing things in the service of our country and for the man standing next to them. I can’t think of a better way to spend my time then to honor these legacies by doing my part to chronicle their lives and keep these fine American’s stories alive.

Taylor Hathorn, fourth-year journalism major, has helped handle the logistics for the trip and is excited for the trip to get underway.

When Dr. Geidner told us last April that we would potentially be going to Gettysburg for the 2013 Medal of Honor convention, it seemed so far away and unrealistic with the finances that we initially had available. But over the past few months, our administrators, college, and alumni have helped fund our trip and given us the opportunity to ability to tell this important story.

Every class I went to today, I had a professor asking me what I was most excited about and who I could not leave Gettysburg without interviewing. The excitement of my peers and professors is helping build even more excitement for what we’re about to experience.

The months that have gone into the logistics and planning of this adventure have been challenging, but well worth it. I haven’t even come close to packing for the convention, but we have plenty of questions written for Bruce Crandall, Hershel “Woody” Williams, Wolf Blitzer, Sebastian Junger and many of the other amazing recipients and journalists that we are getting the opportunity to interview.

I can’t wait to start filing stories from Gettysburg, maybe I’ll even upload a few vines of us reading the Gettysburg address. Who knows! Stay tuned.

Nick Geidner, an assistant professor of journalism and director of the Medal of Honor Project, and Mike Wiseman, video specialist in the School of Journalism and Electronic Media, will accompany the students to Gettysburg.