Lamar Advertising is helping spread the word about the convention. They have provided three bullion boards–on I-40 near Alcoa Highway, I-40 west and one on Kingston Pike, advertising the convention. 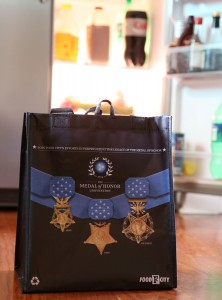 According to Account Manager Keith Austin, there are plans in the works, if space allows, to incorporate digital billboards as a part of the convention.

The digital billboards would be used to welcome the recipients to the convention, and allow attendees to interact with recipients using text or twitter to post their message to a billboard.

Finally, in support of the MOH Convention, Food City is selling Medal of Honor reusable shopping bags with proceeds benefiting the convention. Bags can be bought at any food city location, or individuals can make a monetary donation of $1, $3 or $5 when shopping at Food City.

Visit medalofhonorproject.org and mohknoxville.com and follow us on Twitter at @MoHProject for the latest updates on the 2014 convention.