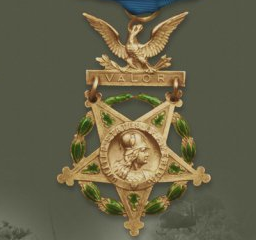 President Barack Obama will award 24 Medals of Honor in a White House ceremony Tuesday. The ceremony will be the largest of its kind, since World War II. The Valor 24 recipients are individuals from previous wars – World War II, Korea, and Vietnam – who due to prejudice or politics were not originally awarded the Medal of Honor.

Of the 24 recipients, three are alive today. Soon after they receive their medals from the president, they will be extended invitations to join the 74 other living Medal of Honor recipients in Knoxville for the 2014 Congressional Medal of Honor Society convention.

We have compiled some information about the soon-to-be recipients, so the Knoxville community can get to know them before they visit in September. Please visit the Army’s Valor 24 site to learn about the 21 posthumous recipients.

Santiago Erevia volunteered for the army in 1968, knowing it would be likely that he would be sent to Vietnam.After arriving in the country in November, Mr. Erevia survived many close calls. On one occasion, a grenade sent shrapnel into his back, earning him the Purple Heart; however, he returned to work the next day. He also received the Bronze Star for his efforts to capture the North Vietnamese Army. Another close call happened as he helped fellow soldiers climb out of a channel. A few men went ahead and encountered a land mine. The first three men were severely injured; Mr. Erevia escaped unscathed.

On May 21, 1969, as his battalion began their assault on Tam Ky, things went downhill quickly. As the numbers of wounded men increased, Mr. Erevia’s M16 malfunctioned. His company commander ordered him to stay back and care for the wounded men. Soon Mr. Erevia’s position came under attack.

Along with his friend, Spc. Patrick Diehl, Mr. Erevia collected an M16 and a handful of grenades and took position behind a tree. Mr. Erevia and Mr. Diehl were standing back to back behind the tree. Before they could advance, Mr. Erevia’s friend and fellow soldier was shot in the head and killed.
Mr. Erevia left his friend and charged the enemy. Using his two M16s and a few grenades, he fought his way through four enemy bunkers, and returned to care for the wounded men until helicopters arrived to help.

After Vietnam, Mr. Erevia returned to San Antonio, Texas and joined the National Guard, serving for 17 years. In 1970, he received the Distinguished Service Cross for valor, and will now be receiving the country’s highest honor, the Medal of Honor.

Distinguished Service Cross citation:
The President of the United States of America, authorized by Act of Congress July 9, 1918, takes pleasure in presenting the Distinguished Service Cross to Specialist Fourth Class Santiago Jesus Erevia, United States Army, for extraordinary heroism in connection with military operations involving conflict with an armed hostile force in the Republic of Vietnam. Specialist Fourth Class Erevia distinguished himself on 21 May 1969 while serving as a radio-telephone operator with Company C, 1st Battalion, 501st Infantry Regiment, 101st Airborne Division (Airmobile), during a search and clear mission near Tam Ky City in the Republic of Vietnam. After his platoon had penetrated an enemy defensive perimeter, Specialist Erevia was delegated to remain behind and care for the wounded while the rest of the platoon pushed on against the adversary. As Specialist Erevia began administering first aid to the battle casualties, their position came under heavy fire from a line of enemy bunkers to his left front. Without hesitation, Specialist Erevia crawled from one wounded man to another gathering weapons and ammunition. Armed with two M-16 rifles and several hand grenades, he then rose to his feet and charged directly into the fire of the hostile gun emplacement, discharging suppressive fire on the enemy as he ran. Once near the first bunker, Specialist Erevia edged his way up to the emplacement under intense fire from the other bunkers and unleashed a grenade on its defender. He then maneuvered to the second and third bunkers employing the same tactics and destroyed both fortifications and their occupants with well-placed grenades. His supply of hand grenades now exhausted, Specialist Erevia fought his way to the final bunker, running and firing both M-16 rifles simultaneously, and killed the fortification’s defender with point-blank fire. Having single-handedly destroyed four enemy bunkers and their occupants, Specialist Fourth Class Erevia then returned to the soldiers charged to his care and resumed treating their injuries. Specialist Fourth Class Erevia’s extraordinary heroism and devotion to duty were in keeping with the highest traditions of the military service and reflect great credit upon himself, his unit and the United States Army.
Additional reading:
Staff Sergeant Melvin Morris
Melvin Morris dropped to his knees when President Barack Obama called him at his Cocoa, Fla., home. The president was calling to tell Mr. Morris that he would be awarding him with the Medal of Honor, America’s highest military honor. Mr. Obama also apologized and said it should have happened 44 years ago.

In 1959, Mr. Morris joined the Oklahoma Army National Guard. He was then asked to join the active duty Army. By 1961, he was a member of the Army Special Forces, wearing the iconic green beret. He volunteered to serve two tours in Vietnam.

On September 17, 1969, Mr. Morris was leading a search and destroy mission near Chi Lang. One of the other advisers on the mission was killed. Mr. Morris went to recover his body, because as he said, “You don’t leave a soldier behind.”

Mr. Morris eliminated four bunkers as he advanced to the body and was shot three times, once each in the chest, arm and hand. Through it all, Mr. Morris was able to recover the body and important documents the commander was carrying, including maps that could be valuable to the enemy. He was award the Distinguished Service Cross for his actions.

After the war, Mr. Morris stayed in the military. He rose to the rank of sergeant first class and retired in 1985. He has been married for 51 years to Mary Morris. They have three children, two of which have served in the military.

Distinguished Service Cross citation:
The President of the United States of America, authorized by Act of Congress, July 9, 1918 (amended by act of July 25, 1963), takes pleasure in presenting the Distinguished Service Cross to Staff Sergeant Melvin Morris, United States Army, for extraordinary heroism in connection with military operations involving conflict with an armed hostile force in the Republic of Vietnam, while serving with Detachment A-403, Company D, 5th Special Forces Group (Airborne), 1st Special Forces. Staff Sergeant Morris distinguished himself while serving as commander of a strike force on a mission north and east of Chi Lang. Sister companies of his battalion had encountered an extensive enemy mine field and were subsequently engaged by a hostile force. By radio Sergeant Morris learned that a fellow team commander had been killed and had fallen near an enemy bunker. Immediately reorganizing the strike forces into an effective assault posture, he advanced them and then moved out with two men to recover the body. Observing the maneuver, the hostile force concentrated their fire and wounded both men accompanying Sergeant Morris. After he assisted the two back to the lines of the main force, he again charged into the hail of fire to approach the nearest enemy bunker, throwing grenades into it. As his men laid a base of suppressive fire, he neared the position of the team leader’s body. When a machine gun emplacement directed it strafing fusillade at him, he annihilated the position with hand grenades and continued his assault, eliminating three additional bunkers. Driving the enemy from the entrenchment nearest the fallen team leader, he retrieved his comrade and started to his troop’s position. As he neared the strike force he was wounded three times, but he struggled forward until he brought his fallen comrade to the friendly position. Staff Sergeant Morris’ extraordinary heroism and devotion to duty were in keeping with the highest tradition of the military service and reflect great credit upon himself, his unit, and the United States Army.
Additional reading:
Sergeant First Class Jose Rodela
“I’m glad I’ve been selected. It’s a beautiful thing,” said Jose Rodela to KRIS-TV about being awarded the Medal of Honor.

Like Mr. Erevia, Mr. Rodela enter the U.S. Army as a high school drop-out. He quit school after sophomore year to follow some friends of his that joined the Army. Mr. Rodela thrived in the military and was a sergeant first class in 1969, when his Medal of Honor actions occurred.

Mr. Rodela was in charge of recruiting and training Cambodians. On September 1, 1969, Mr. Rodela lead his troops in what would become a 12-hour firefight. The citation below reads, “The immense concentration of enemy fire which was brought to bear on Rodela’s position is practically impossible to describe with any justice.”

Yet, Mr. Rodela was able to maintain his focus and leadership, tending to the injured and advancing on the enemy. Of his actions, Mr. Rodela told the NCO Journal, “any member of the Army can do the same thing as I did. Just remember your training.”

Distinguished Service Cross citation:
The President of the United States of America, authorized by Act of Congress, July 9, 1918 (amended by act of July 25, 1963), takes pleasure in presenting the Distinguished Service Cross to Sergeant First Class Jose Rodela, United States Army, for extraordinary heroism in connection with military operations involving conflict with an armed hostile force in the Republic of Vietnam, while serving with Detachment B-36, Company A, 5th Special Forces Group (Airborne), 1st Special Forces. Sergeant First Class Rodela distinguished himself by exceptionally valorous actions on 1 September 1969 while serving as the company commander of a mobile strike force unit on an operation in Phuoc Long Province. When the battalion came under an intense barrage of mortar, rocket, and machine gun fire, Sergeant Rodela, ignoring the withering enemy fire, immediately began placing his men into defensive positions to prevent an enemy assault which might overrun the entire battalion. Repeatedly exposing himself to enemy fire, he began to move from position to position, suppressing fire and assisting wounded men, and was himself wounded in the back and head by rocket shrapnel while recovering a wounded comrade. Alone, Sergeant Rodela assaulted and knocked out the rocket position. Successfully returning to the battalion’s perimeter, Sergeant Rodela continued in command of his company, despite his painful wounds, throughout eighteen hours of continuous contact until he was evacuated. Sergeant First Class Rodela’s extraordinary heroism and devotion to duty were in keeping with the highest traditions of the military service and reflect great credit upon himself, his unit, and the United States Army.
Additional reading:
Reporting by Taylor Hathorn and Samantha Beard