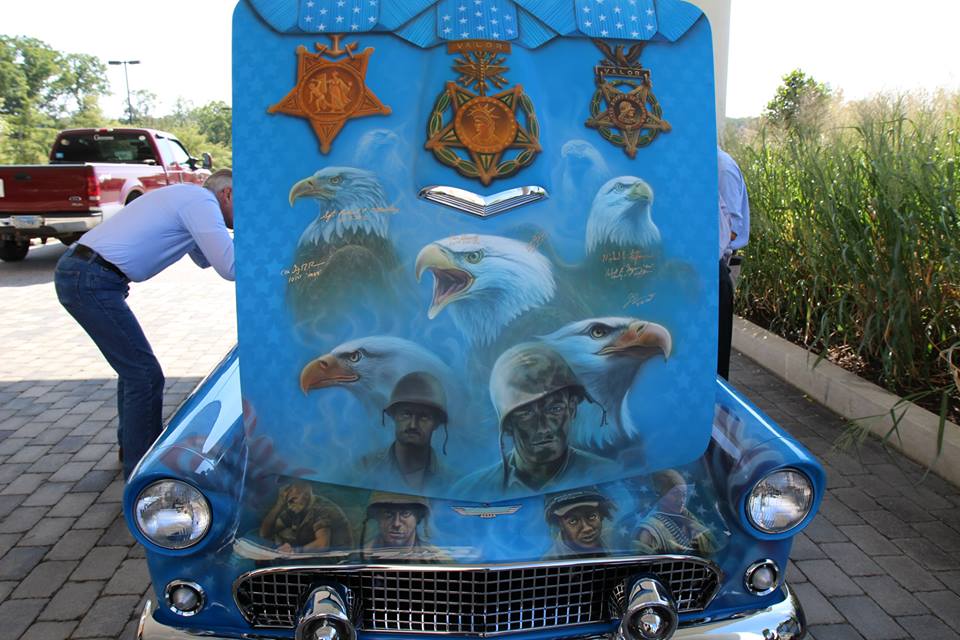 We left Knoxville, bright and early, at 6 in the morning. The drive to Gettysburg was beautiful. Albeit, I slept for most of the eight hour trip. We reached historical, downtown Gettysburg at about 2 in the afternoon.

There is something special about Gettysburg, Pa. You can practically breathe in the patriotism from the flag-lined streets and monument-laden battlefield. From when we stepped out of the van at the Wyndham, home of the 2013 Medal of Honor Convention, there were signs of sacrifice, patriotism, and a respect for our military and veterans around every turn.

Sitting in front of the Wyndham was the refurbished 1956 Ford Thunderbird. This wasn’t any ole’ Ford. Shining in the sun, this baby blue beauty was a rolling memorial to the living and deceased Medal of Honor recipients. The car serves as a beacon of love, pride and patriotism for the men who sacrificed so much for our country.

The moving mural includes: painted dog tags representing the 80 living Medal of Honor recipients that appear to be thrown across the dash, the faces of soldiers in battle, eagles symbolizing the strength of the American people and emblazoned across the hood representations of the Medals of Honor for each branch of the service.

The idea and funding for the car can be credited to Ronald Rains, a veteran from Texas who grew up with two Medal of Honor recipients in Odessa, Tx.

Mr. Rains said, he wanted to contribute something back to not only the wounded warriors, but the Medal of Honor recipients’ legacies as well. The kind, soft-spoken man told me all about the car and the symbolism behind. He never spoke of himself or the sacrifice he put into making the car.

When I talked to his friends and family they all said, he has put countless time, money and love into making the Thunderbird and hundreds of other projects like it. Another project of his is running a rehabilitation ranch in Texas, where wounded soldiers and their families can spend the weekend, rent free, enjoying the outdoors and each others’ company.

The artist behind the project is Mickey Harris, a Tennessee native, who has been drawing since he was 19-years-old and refurbishing cars for over 20 years. He spoke highly of Mr. Rains and of both their love for the Medal of Honor and our nation.

Their passion for veterans does not just show in their contributions to the project, but exudes from their voices and expressions when speaking about it as well. Talking to me wasn’t just another interview, it was an opportunity for them to show me what made them wake up every day; it was an opportunity to teach a younger generation about a driving force behind this nation.

They may not know it but they affected me far more than they realized. It is a breath of fresh air to see two people so devoted to something that they could have easily avoided. Passion like they have is rare and admirable.

The Medal of Honor recipients and other men, women and even children we have talked to have taught me so much about selfless love and compassion already, and it’s only day one. Maybe it’s because I’m easily overwhelmed by patriotism, but I believe there is something special going on here in Gettysburg.

The Medal of Honor car will be auctioned off at the Barrett-Jackson Automobile Auction. Funds raised from the sale of the car will benefit the Wounded Warriors Family Support and The Congressional Medal of Honor Foundation.